What is an Autoimmune Skin Disorder? 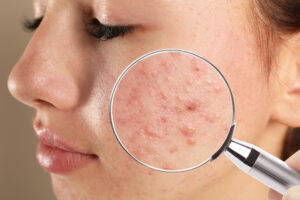 When a person’s immune system attacks their own tissues, the body reacts in a number of ways. An autoimmune disorder can affect a wide range of organs, joints and muscles, and other physiological tissues, depending on the underlying ailment. The skin is a common target of autoimmune diseases. A wide variety of autoimmune skin diseases exist, including the more common scleroderma and psoriasis, as well as the less common dermatomyositis and epidermolysis bullosa.

Scleroderma is a broad disease that affects all of the body’s connective tissue, including the skin. Patients may suffer symptoms in their blood vessels, muscles, and organs as well as skin abnormalities as a result of an autoimmune condition spreading throughout the body. When scleroderma is localized, patches of thicker skin appear, but when it is systemic, it has the biggest influence on a person’s quality of life. Progressive systemic sclerosis (PSS), often known as systemic sclerosis (SS), and CREST syndrome are two types of systemic scleroderma. Sclerodermic symptoms can affect the lungs, esophagus, intestines, heart, and kidneys in patients with systemic scleroderma. There are many symptoms of CREST syndrome, which include calcinosis, Raynaud phenomenon (red or blue fingers and toes), esophageal dysfunction, sclerodactyly (thick and tight skin around the fingers and toes), telangiectasia, and sclerodactyly (red skin blotches causes by dilated blood vessels). Other symptoms of scleroderma, such as shortness of breath, wheezing, constipation or diarrhea, bloating and even eye itching and burning can also occur. Scleroderma affects both sexes, however, it is more common in women in their 30s and 40s. This autoimmune disease has been linked to occupational exposure to silica dust and polyvinyl chloride. Approximately 33% of Americans with scleroderma have it in the systemic form, according to the Scleroderma Foundation.

Psoriasis, Skin redness, and itching are common symptoms of psoriasis, a persistent inflammatory condition. It is possible to have five different types of skin inflammation due to psoriasis: plaque, erythrodermic, guttate, inverse, and pustular. Plaque psoriasis is the most prevalent form, characterized by elevated, red patches of skin that are coated with flaky, silver-white scales. People who suffer from the disease are more often than not related to someone who has the same or similar condition. This suggests that it is an inherited ailment. The signs and symptoms of psoriasis can come and go throughout a person’s life. This autoimmune illness can be induced by infections, skin injuries, sun exposure, medicine, alcohol, or even stress. Psoriasis can be more severe in those with impaired immune systems, such as those with HIV or receiving chemotherapy.

Dermatomyositis, There are many other types of autoimmune disorders that can affect both the skin and muscles and dermatomyositis falls into the latter category. Polymyositis, an autoimmune disease that causes muscle weakness, soreness, and stiffness, often occurs in conjunction with dermatomyositis. Shortness of breath and swallowing difficulties may also be present in patients with these diseases. Although both dermatomyositis and polymyositis present with the same symptoms, a skin rash and thickening and tightening of the skin in numerous locations identify dermatomyositis. Patients with Dermatomyositis may have purple eyelids as well. Symptoms of childhood dermatomyositis include fever, exhaustion, a rash, and muscle weakness. People in their 40s to 60s are at the greatest risk of developing the disease as children (5-15 years of age). Women are more likely than men to suffer from this illness.

Bullous pemphigoid, It is a long-term autoimmune condition that causes skin blisters of varying severity. Patients may just have slight redness or irritation of the skin, or they may develop many blisters that burst open and turn into ulcers, depending on the severity of the condition at hand. There is a one-third chance that bullous pemphigoid patients will develop blisters in their mouths, which is common in around a third of cases. Itching and bleeding gums may also be present in some patients with this illness. It’s not uncommon for the elderly to be diagnosed with bullous pemphigoid, but it’s more common among those in their 60s and 70s. Bullous pemphigoid affects both sexes equally. Detecting the prevalence of this disease is challenging due to the erratic nature of its symptoms, which for many individuals resolve entirely after six years. According to one estimate, a typical large hospital sees between 5 and 10 new instances of bullous pemphigoid every year. Consult a doctor if you notice any of the following skin conditions. Diagnose what is causing your symptoms and get you started on the right treatment plan with her support.

Patients with primary immunodeficiency illnesses are more likely to develop the significant autoimmune or inflammatory diseases. In order to improve quality of life and reduce difficulties associated with primary immunodeficiency illnesses, early detection and treatment of these symptoms are essential. In order to do this, patients and their healthcare providers need to know what to look out for when it comes to symptoms that could indicate an autoimmune disease. The patient and the different experts involved in their care must work together to ensure that the immunosuppression used to regulate the autoimmune process does not exacerbate the underlying fundamental immunodeficiency. Treating an illness may necessitate frequent dosage modifications or alterations in the overall approach.